When you are facing a big pile of fish that all need to be filleted, you can get a little discouraged when you first start in with your manual knife. Even if you have a good fillet knife, cutting fillet after fillet manually can quickly become a time-consuming – and boring – chore. If you are someone who regularly needs to produce a large volume of fillets, an electric knife may be the right choice. There are both corded and cordless models on the market today, and a quality electric fillet knife can make quick work of a project that otherwise may have taken hours. One of the keys to buying an electric fillet knife is making sure that you purchase a quality product which is up to the tasks you have in mind. Unfortunately, some cheap knives are available today, and you would probably be better off just using a manual option rather than trying to make a poor electric knife work for you. 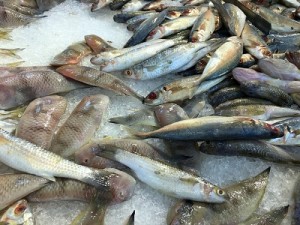 As long as you are willing to invest a little bit of time and money in the process of finding an electric fillet knife, you should be able to walk away with a great product that will be a trusty sidekick for years to come. Another advantage of using an electric fillet knife that is offered by some models is the ability to change the size of the blade in just moments. This is obviously not possible with a traditional fillet knife. If you are going to be catching a variety of different sizes of fish, for instance, you may need to carry two or three manual fillet knives to handle the work. With an electric knife, you could pack along just one knife with a couple of other blade options to switch in and out as needed.

After reviewing all the top electric fillet knives available, we’ve selected our top 7 picks in the comparison table below. We’re confident you’ll find the perfect model for your needs.

Mobile Users: For optimal viewing, tilt your phone to landscape (wide-view) to see the entire table.

Show Me More Options On Amazon.com

To assist you in making a good buying decision, we have compiled the following list of five of the best electric fillet knives. These are knives that come from respected brands, and these models have all received plenty of praise from previous buyers. Depending on how much you want to spend and the exact features that you are looking for, one of the five knives listed below should wind up being a great match for your needs.

When it comes to convenience, it doesn’t get much better than cordless. Free from having to look for an outlet within reach, you can use this knife wherever and whenever you need it. With the power of a lithium ion battery on your side, you can finish your fillets quickly and get on with the day. In fact, you can get up to 80 minutes of continuous runtime from the battery in this knife, so don’t plan on it going dead anytime soon. Also, thanks to the way lithium-ion batteries work, this knife won’t fade as the batteries drain – it will run at full speed until it can run no more. When the battery finally does run dead, it can recharge to full in just two hours.

The reviews on this knife are mostly positive, with some even stating that it has moved them over from a fixed blade knife to an electric model for their filleting needs. Also, others have mentioned how nice it is to be able to use the knife wherever they need it thanks to the cordless design. For an all-around electric fillet knife that can handle just about whatever you happen to catch, take a look at the Rapala Lithium Ion Cordless Fillet Knife. 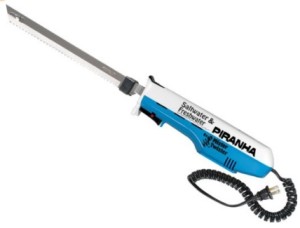 Going in a different direction, our next option up on the list is a corded model, which comes in at less than half the cost of the first knife we reviewed. The Piranha Electric Fillet Knife has a large 9 blade, which is made from stainless steel. There are hundreds of serrations in the blade edge, meaning it can get through a variety of fish, among other things.

There are a number of positive reviews that have been left for this knife, including how the knife can actually be used for other kitchen applications beyond filleting fish. Some have stated that this knife stands up better to use than some of the other fillet options they have tried, and users seem to feel that it is sharp enough to get the job done. For a lower-cost option than the Rapala that started our list, you may want to examine the Piranha for yourself. 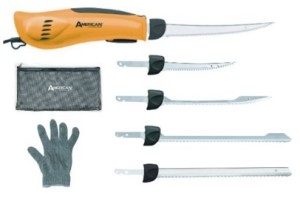 This is an electric fillet knife that also includes the accessories that you may need while out in the field. You will have a total of five blades to use while filleting, and you will also have a glove that can be used to keep a tight grip on your fish. The American Angler Pro is a corded model that uses a 111-volt motor, and it includes a carrying bag to keep everything organized no matter where you happen to be going. You will need to spend to own this knife and the blades that come with it, but that investment may be worth it if you are a serious angler who spends plenty of time filleting fish.

The reviewers who have left comments about this knife so far have a variety of compliments for it, including the fact that it is capable of dealing with a number of different types of fish thanks to the various blades. Users find that the motor is capable of moving the blades through the fish successfully while others state that the knife holds up over time while dealing with large volumes of fish. While this is an electric fillet knife that will work nicely for just about any angler, it is a great pick for someone who needs a variety of blades to accommodate different types of fishing. 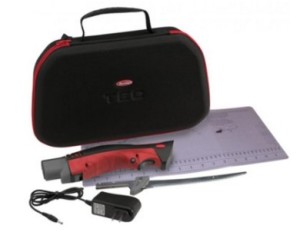 This is another knife that comes with some extras such as a carrying case to help you get your gear around from place to place. As was the case with the first knife on our list, this one features a lithium-ion battery so you can use it while free from cords. The handle of the knife features an ergonomic design to provide for comfort during use, and you won’t have to deal with any loss of power as the battery drains thanks to the lithium-ion usage.

Reviews for this product are solid overall, with a few complaints from select users. While many users feel like this knife is up to the task of most fillet jobs, some think that it is a little light on power. With that in mind, you might want to consider what kind of filleting you will be doing with the knife. If you have large, tough fish to work through, a more-powerful model may be needed, but this one should be up to the task of many standard fish.

To finish up the list, we have a corded model from Rapala, which is the same respected brand name that kicked off our list. This knife uses 110-volt power, and it has a 7.5 blade to produce the fillets. There is a one-year warranty that comes with the product, along with a heavy duty motor. Since corded models are less expensive than those using lithium ion batteries, you can purchase this Rapala for around half of the cost of the previous Rapala we reviewed.

The reviews for this product are some of the best that can be found in the electric fillet knife market. There are plenty of compliments to go around, with users appreciating the easy of use, the quality of the build, and the speed with which they can complete their filleting tasks. If you tend to fillet your fish in a location where you have access to power and will be able to plug in this unit, the Rapala Heavy Duty Electric Fillet Knife just might be the right tool for the job.

An electric fillet knife can be your best friend, especially if you tend to pull a lot of fish from the lake and have to spend time by the shoreline cleaning them up before you can head home. No matter what purpose you have in mind for the fillet knife – out in the field or at home in the kitchen – it is important that you pick out one which will serve your needs just right. Take a look at all five options we have presented above, and decide which will meet up with your budget and your demands. Thank you for reading, and we hope this article has helped you settle on the perfect electric fillet knife!