A fillet knife is used, not surprisingly, to create fillets. So what is a fillet? Pretty much any boneless piece of meat can be considered a fillet, including beef, chicken, fish, and more. Most of the time, when shopping for a fillet knife, buyers are doing so because they plan on creating fish fillets from their catch. While fillet knives certainly have other uses in the kitchen, this would normally be considered the primary task of the tool. Unlike some other knives that you will encounter, such as a chef’s knife, there is a wide range of dimensions and even styles that can fall into the category of a fillet knife. 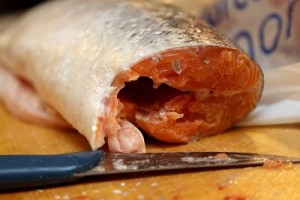 Generally, this kind of knife will have a long and flexible blade, allowing it to remove the skin successfully while leaving as much of the meat intact as possible. It is the flexibility of the knife blade that sets a fillet knife apart, as most knives obviously used a rigid blade to get the job done. It takes some practice to use a fillet knife effectively, so you should expect some degree of a learning curve if you make one of the fillet knives listed below your first ever purchase in this niche.

The main frustration that comes along with using a fillet knife is simply having the wrong one for the job at hand. For instance, if you have a large fillet knife with a blade that is 10’’ or longer and you are trying to fillet a small fish, you are likely going to be disappointed with the results. Fillet knives come in a variety of sizes for a reason, as they need to be properly matched to the task at hand if they are going to be successful. With that in mind, you will want to purchase your knife specifically to deal with your intended purpose, and you may wish to purchase more than one size so you have the versatility you need.

In addition to getting the size right, you want to check on all of the other normal buying guidelines for a knife. It should be sharp, it should be made from a quality material, and you probably want to acquire one from a reputable brand. You don’t need to spend a fortune on your fillet knives, but getting a quality tool will lead to the best results in the end. Below is a list of five fillet knive has impressive reviews, and each should be up to the task of helping you produce a beautiful fillet.

To get started, we turn to a brand name that always seems to have a presence in many parts of the knife market. This Gerber Gator Fillet Knife features a blade that is 7.17’’ long, making for a knife that is a total of 12.2’’ in length. It has a full tang design which helps to give it strength, and the weight of the knife is 4.4 ounces. If you are wanting to pick up your first fillet knife without having to open up the wallet very far, this will be a likely choice. Even with a low price tag, the reviews for this product indicate that it is certainly capable of getting the job done.

Many buyers report having filleted plenty of fish with this product, and there are very few complaints to be found regarding its performance. Although the thin blade might not be up to the task of taking apart larger game, it seems to be just right for taking care of the standard fish filleting project.

Taking the next step up in price, this is a fillet knife from Wusthof. It is similar in size to the Gerber knife, with a 7’’ blade and 11’’ overall size. The blade is made from German high carbon no-stain steel, and there is a leather belt loop sheath included with purchase. Additionally, the black sure-grip handle will help you keep control of the tool at all times.

There is not yet an extensive list of reviews left for this product, however, the ones that have been left are rather encouraging. Most suggest that they are happy with their purchase, as this knife seems to be able to handle the chores that come along with filleting fish. The knife seems to come sharp in the package, and the price is reasonable considering the quality of the product. For a solid fillet knife from a name that is well-known in the cutlery business, take a look at the Wusthof Silverpoint II.

Another fillet knife, another one with a similar size and overall shape. This one is 7 1/8’’ long when measuring the blade, and it is 12 ¼’’ when the whole knife is considered. As mentioned in the title, this knife comes with a leather scabbard, it has a black rubber handle, and the blade is stainless steel. This knife offers a budget-friendly price tag as well.

The reviews for this knife are nothing short of excellent. There have been plenty of comments left at this point, and nearly all of them have something good to say about the R200 Fillet Knife. Some say that the blade has remained sharper than expected over a long period of time while others praise the flexible blade, ergonomic design, and more. To pick up an all-around fillet knife with a low price tag and plenty of performance to offer, consider trying the Rada Cutlery R200 Fillet Knife for yourself.

As our list goes on, we now get to a knife with an even longer blade, however, we keep the price down in a very affordable range. This Kershaw fillet knife has a 9’’ blade, which translates to the overall knife being a total of 14 ¼’’ long. The blade is made from 420J2 stainless steel, there is a co-polymer handle, and an ABS sheath. With a name like Kershaw, you often expect to pay a premium given the impressive history and brand recognition in play.

As would be expected, the reviews for this product mirror what you would think you would receive from Kershaw. Users have stated that the knife has a nice feel, it is useful for working a fillet out of a fish, and it has a sharp blade. If you do fishing that involves catching larger fish and you need a longer blade in order to produce your fillets properly, the Kershaw Fillet Knife with Sheath is one to keep an eye on.

To finish up the list, we turn to a product from Morakniv, which offers a stainless steel blade and plastic sheath with belt clip. There is a limited lifetime warranty that is included with the knife, and it offers a high-friction grip to reduce the chances of the knife slipping in your hands. In a departure from the other products on this list, the Morakniv has a blade of only 3.5’’long, with a total knife length of 8’’. (There is also a longer version available, which has a 6’’blade). Obviously, a smaller knife will be well-suited for smaller fish and other detailed filleting jobs. Just as you wouldn’t want to use a small knife for a big job, you also don’t want to try using a big knife on a small job.

Having the right gear for the task at hand is important, so consider adding a small blade to your fillet knife collection. This model has received excellent reviews thus far, with compliments on things like the flexibility of the knife and the sharpness of the edge.

If you like to fish, and you intend on eating your catch, a fillet knife is pretty much a required piece of equipment. Each of the products on the list above is capable of getting the job done under the right circumstances, but it will be up to you to pick the one that is going to match up with your needs the best. We hope that this list of options has been helpful in your search, and please feel free to take your time in browsing the products that we have presented. Good luck and happy shopping!